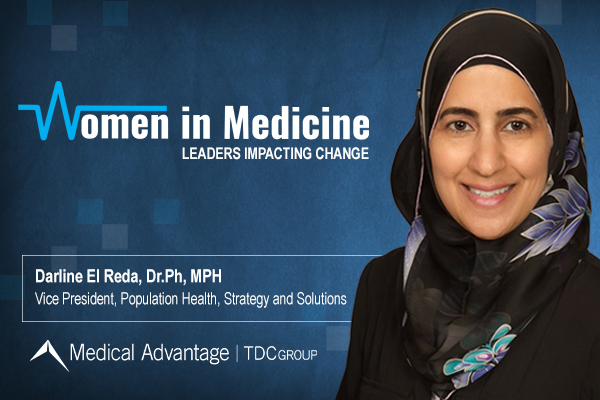 Whether going door-to-door for local public health departments, working for one of the country’s biggest healthcare payers, or delivering lectures in front of university students – Darline El Reda’s career has taken her many places. But one thing has remained constant throughout: her dedication to ensuring marginalized populations have a seat at the table and a voice in the conversation.

“That’s why I  went into public health,” said El Reda, Medical Advantage’s Vice President of Population Health and Strategy Solutions. “Part of it was to serve these populations – and part of it was simply to be present in the room, and bring those perspectives which have so long been overlooked.”

In observation of Women in Medicine Month this September, Medical Advantage is highlighting Dr. El Reda as one of the many amazing women behind the company’s continued success.

El Reda was born and raised in an ethnically-diverse, largely lower-income Los Angeles community. From a young age, El Reda was keyed into the way factors like language and ethnic background influenced the way her neighbors and community members interacted with the healthcare system.

“I was pretty frustrated and amazed that – even though people just wanted their basic healthcare needs met – language was such a barrier. And I remember from early on that I had this sense of, well, that’s just not fair,” El Reda said of her early encounters with the healthcare delivery ecosystem. On many occasions, she found herself serving as a translator or go-between to help neighbors or family members navigate the system to receive basic healthcare services.

During this time, El Reda was inspired by some of her earliest role models – her parents.

As she grew older and her academic career took her to New York, where she received a bachelor’s degree in Biology at Syracuse University, El Reda continued to see those same socioeconomic fault lines defining the way people were able to receive healthcare. “And those things ate at me,” El Reda said.

Following the completion of her undergraduate studies, El Reda returned to Los Angeles to support her family and took her first job in public health, where she worked on contact tracing for sexually-transmitted infections  – including going door-to-door to talk to people and try to persuade them to get tested or get treatment. To this day, El Reda said she still has immense respect for ‘shoeleather public health work’ – or, ‘pounding the pavement’ to talk to people in person and work to solve public health problems.

After completing her Master of Public Health at California State University, El Reda went on to receive her Doctorate in Public Health at the University of Texas at Houston. It was there that another mentor – one of her epidemiology professors – encouraged her to apply for a prestigious fellowship, despite the seemingly long odds of her getting accepted.

“She was always encouraging students to go for it – to not look at the statistics. She was the professor that convinced me to apply for my post-doctoral fellowship, which was viewed as the world’s premier fellowship for epidemiologists. And because of that, I did land the fellowship – and I can’t help but think about where my career would have gone if not for her,” El Reda said.

Later, during her time at the Centers for Disease Control and several more years in public health, El Reda did something unusual for someone in her field: she went to work for Blue Cross Blue Shield of Michigan – a healthcare insurance company, also known as a “payer.” At the time, healthcare insurers were just starting to talk about “what we in public health had been talking about for decades; population health,” El Reda said: about not just reimbursing for  a service that was performed for a patient, but also about patient outcomes and overall  quality of care.

Despite finding herself in new position unusual for those with her background, El Reda always carried inside her what drove her to public health in the first place – breaking down barriers and doing her best to ensure marginalized populations and communities had representation at the table.

“I went over to Blue Cross Blue Shield with the desire to positively impact as many people as possible. The potential of working on programs, initiatives, and strategies which would impact the lives of millions of people – to me, that still had the thread of serving the public, and improving the health of the public,” El Reda said. “I still had the mindset of – ‘hey, we can look for disparities and gaps in the data.’ Let’s point them out, let’s demonstrate that they exist – and then let’s do something about it.”

For El Reda, much of this ongoing struggle to rectify disparities in treatment is personal. As an openly – Muslim woman, she said the expectations and assumptions she’s faced throughout her career have felt different than those for her Caucasian and/or male counterparts. She’s felt firsthand the challenges women have faced, and it hasn’t always been  easy. But she’s not complaining.

Following her many mentors, El Reda is now a mentor to many young healthcare professionals like herself, through her teaching of public health courses at Michigan State University.

“For me, it’s important that my work is contributing to a diverse workforce, a workforce where students can see themselves. Of course, your impact is difficult to measure. But you like to think that you’re making an impact simply by being in the room – by influencing and encouraging that next generation of public health professionals,” El Reda said.

For her students, El Reda has one piece of advice – don’t be afraid of unexpected twists and turns along the way.

“I’ve encountered a lot of young students who think that they’ve planned out all the paths they’re going to take in their career,” El Reda said. “My advice? Be open to those forks in the road, those alternate paths – and don’t view those as setbacks, but rather as  unforeseen opportunities that can lead to an amazing professional journey if you are bold enough to go down those roads.”

Stay up to date!